“A dog, particularly an exotic like Charley, is a bond between strangers.  Many conversations en route began with ‘What degree of a dog is that?’” 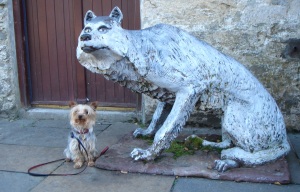 Our dog is the one on the left.

Like many thirty-something couples with no kids, we have a dog. Like Charley, our pup is exotic, and she has definitely created bonds for us with neighbors and strangers alike. It is not unusual for burly, tattooed men to get down on their knees in the street and gush over how cute she is. People tend to speak to her first, and whoever happens to be at the other end of her leash second, if at all. However, she is Scottish and requires a passport to travel, not to mention the cost of a doggie ticket on a trans-Atlantic flight. So she spent her vacation with a friend of ours in Scotland. Our point of contact with strangers en route would have to be something else.

It turned out to be the car. It’s a Mazda RX8. Wide and low, with sweeping Ferrari lines, 18-inch rims, and a rotary engine. It makes a sound like a jungle cat, and appropriately is also jungle green. It handles like a racecar, and the great temptation is to drive it like one. Whether you’re doing 90 miles an hour or 20, the car gives off the sort of full-throated roar that turns heads and slows traffic. Other drivers let us pull out in front of them. Men at gas stations unfailingly strike up conversations, always beginning with an appreciative, “Nice car!”  The car is our way back in. 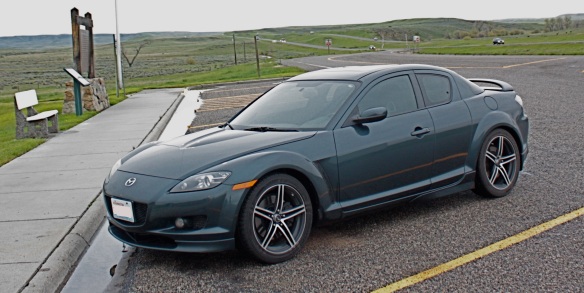 Steinbeck named his truck Rocinante, after Don Quixote’s fabled horse. His journey was a quest, and he felt that his steed needed an appropriate moniker. Our journey is perhaps slightly less epic, but in similar style, we wanted to give our chariot a name appropriate to its temperament. We’ve nicknamed the car Kit, after the artificially intelligent supercar in the old 1980s American television show Knightrider. We named the RX8 after the car in the show because it has a mind of its own.  Set the cruise control for 72 miles an hour, and it slowly creeps up to 73.  If you don’t correct it, pretty soon you look down and it’s 77 miles an hour, then 82.  When you tap the brakes, it groans as if in disappointment. Kit wants to move. The car is as excited about this journey as we are, and it wants to get there faster.

Our plan was fairly simple. We’d fly into Seattle, borrow Dad’s RX8, and drive. We’d circle the American West, through Idaho and Montana, down through Wyoming, Colorado, and New Mexico, and then west across Arizona. We’d finish by swinging up the coast back to Seattle on Highway 1, one of the most beautiful routes in the world. Along the way we’d see some of the key tourist spots we remembered from childhood, and some new ones we felt were important. To afford all this, and meet more people along the way, we’d spend most nights camping, descending on friends and family at strategic intervals to take advantage of showers, comfortable beds, and washing machines. In a little over a month, we’d cover 5,000 miles.

Our very first day on the road, it was clear that we had failed to take into account the fuel consumption of our borrowed hot rod. We drove east on I-90 out of Seattle at 7am, entering the Cascade Range and Snoqualmie National Forest just as the sun was erasing the long shadows of the fir trees from the highway. The first morning of a long road trip is always exhilarating; a thermos of coffee, a full tank of gas, and the early morning open road in front of you. Our spirits were high. But it only took a hundred miles or so for us to realize that all the performance advantages of the RX8 come at the expense of an appetite for gas that would put Steinbeck’s big truck to shame. We want to relax and go with the flow of the road, but we’re also going to have to count the miles between gas stations and tourist destinations.

So our plan was immediately shot full of holes, just like the road signs in Montana. (Apparently this is a tradition in Montana: if you can’t find a moving target to practice your marksmanship, the next best thing is to be moving and try to hit something standing still. There must be legions of people with guns hanging out of car windows, aiming at those big green signs by the side of the road. An example of American ingenuity at work.) But as Steinbeck knew, any travel plan is potential prey to circumstance. We’ll just have to let the trip take us.

1 thought on “The Best Laid Plans”